An independent and perhaps the most important liturgical edifice of the Orthodox Church is the iconostasis - the picture wall or partition. It separates the chancel, which is experienced spiritually and  is accessible only to the priests and deacons, from the nave or Church hall, where the believers congregate.  It therefore constitutes the dividing line between the divine and the earthly world. In one respect, it is believed that this "partition" symbolizes what was originally the "curtain" in Jewish temples, which separated the altar from the rest of the temple, whilst in another it is thought to have developed from the early-Christian choir barriers (cancelli).  It corresponds also to the “Lettner” (lectern) in the Gothic churches of the West.
The complicated history of development of the iconostasis has many different stages.  Over the course of time the partition, which once consisted simply of curtains, became a solid wall of splendidly crafted woodwork, which framed four or five rows, sometimes more, of icons.
Like Orthodox liturgy, the iconostasis reached its ultimate form during the fourteenth century.  In the Balkan countries it remained a relatively low structure, whereas in Russia it reached high into the nave.  .
One remaining allusion to the curtains in the Jewish temple is the curtain usually found above the door.  On the right-hand side of the so-called Royal Gates or royal, holy Gate, the patron saint of the church is represented.

The most important part of the iconostasis, the Deesis (the intercession group, Greek: supplication, prayer), also called Tschin (Russian cin = order, rank) is located above the Royal Gates with depictions of the preaching of the Gospel and the four evangelists.  The Deesis usually portrays the enthroned Pantokrator (Omnipotent Ruler) Jesus Christ, Saviour of the World in the centre, on the left Mary, Mother of God and on the right John the Baptist , the precursor, both facing toward Jesus Christ and in the pose of intercession.  Between this group (occasionally shown on its own = small Deesis) and the Royal Gates one may sometimes find, in addition, the Communion.

On the left-and right are the archangels, apostles, saints (martyrs, great miracle-workers, Church teachers).  The “Tchin” illustrates the intercession of the Church for the sins of the world.  The earthly congregation is thus constantly reminded of the spiritual world’s endeavours for their salvation.  Above the Tchin are the twelve most important Church holidays (11), to which are often added some less important ones.  The Church holidays, considered by the Orthodox Church to be the “pearls of the divine dogmas” are the essential elements of Orthodox teaching.  They represent a sort of painted catechism.  Above the row of celebration or holiday icons we find the row of the prophets of the Old Testament (12), each turning to face the depiction of God’s anthropogenesis, namely the Mother of God of the Sign (Znamenie), who symbolizes the Old Testament Church’s belief in redemption.  The uppermost row represents the early progenitors from Adam to Moses (13), centred around the holy Trinity or the Crucifixion.  Apart from the Royal Gates, the picture wall has two other doors left and right of the Tchin.  The icons displayed here are not arranged in any strict, binding schema.  They harmonize with the church’s character and local traditions.  The area between the doors is grouped together as a "veneration sequence" because these icons are accessible to the believers, the people, and thus are the immediate object of their veneration. 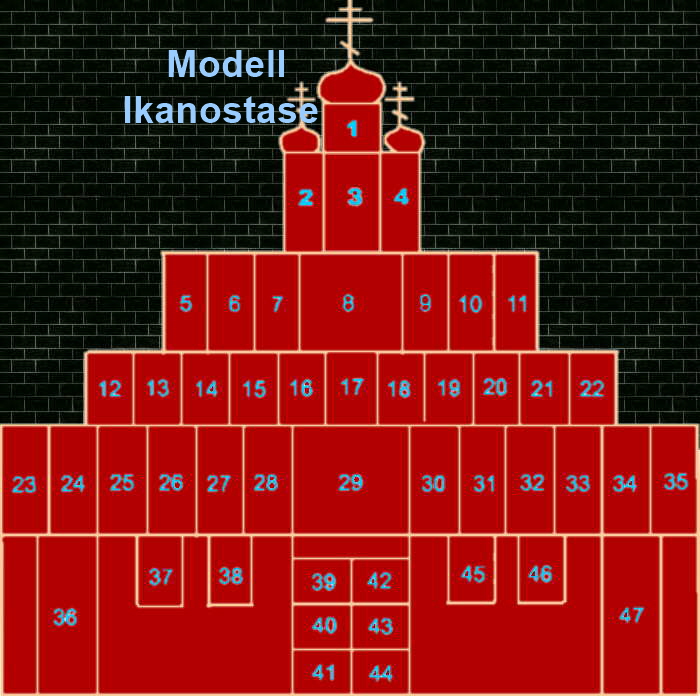